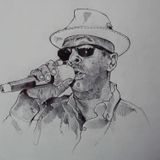 Jah Screechy was born Elton Sinclair, and raised by his grandparents in Kingsvale, Hanover, Jamaica. Jah Screechy moved to the UK at age 7 and grew up in Northwest London. As a youth, he was inspired by artists such as I Roy, Willie Williams, Dillinger and Toots and the Maytals.
“I began learning the trade on a small sound with some friends of mine, the sound was called Black Lion. We used to play excursions and against other sounds at parties. I wanted to be a mic man from long time.”
As a young man, he couldn’t resist the magic of the dancehall and sound culture, finding his way into Sir Coxsone Sound events by carrying sound boxes to obtain free entry to the dances. Although trained as an engineer, Screechy’s skill as a wordsmith is what made an impression on audiences.
Many Jah Screechy fans were first exposed to his signature style of toasting, as it was once called in the 70s, through his performances with Sir Coxsone Outernational Sound System.