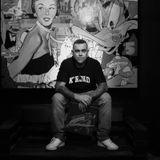 Take it 2 the Bridge podcast no.96 - Bez and Hudge Attic Sessions Part Two
by Take It 2 The BridgeReposted

Take it 2 the Bridge podcast no.95 - Bez and Hudge Attic Sessions Part One
by Take It 2 The BridgeReposted

HUDGE Live from The Disco Shed!
by DJ HUDGE

Take it 2 the Bridge podcast no.46 - Hudge live from Auckland
by Take It 2 The BridgeReposted

Quote from Higher Days "Today we’re profiling hip hop (and more) hero Hudge, who arrived in Aotearoa from London close to a decade ago.
London’s loss was most definitely Auckland’s gain. Hudge had been immersed in the UK capital’s hip hop scene from 1989, stockpiling a deep knowledge and love of music old and new.
After waving bye bye to Blighty in 2012, he quickly established himself as a prime mover in Auckland’s music scene.
Following a storming debut gig at The Turnaround, he teamed up with T-Rice to host the Uptown Boogie show on George FM. As well as playing all over town - and beyond - he’s clocked up a long list of standout sets at Splore. Tour DJ for Blak Twang, Che Fu, Children of Zeus, Guilty Simpson, London Posse legend Rodney P and many more, he’s also appeared alongside such heavy hitters as Mr Scruff, Norman (Jay MBE), The Nextmen and our own P-Money.
Founder of TI2TB, The Boog, Friends & Whānau and Propa events and award winning Auckland venue Neck of the Woods."