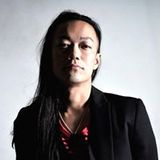 He started the apparel brand of his own in 2000. In the following year, he raised a creative brand "ENTIA" and established a creative works "ENTIA Creative Co., Ltd." in 2009.
He acts over the designer, the promoter, the DJ and many topics, and his ability is paid to attention from each district.

He started planning and administrating an event in 2000 and by the present has made much success of the parties of the well-known artists and the promotion event of the major company.
Moreover, his activity is not remaining in Japan but widening.

His DJ activity begun in 2002, and he has been playing with Kaskade、Fedde le Grand、KITSUNE、CALVIN HARRIS、DAISHI DANCE who have their results all over the world.
He is active in club events, brand parties and fashion show with glamorous and emotional House and Electric sound.