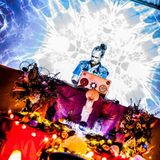 Never miss another
show from hedflux

A life-long electronic music enthusiast, Steve has been spinning in clubs and festivals  since before he was legally allowed enter them. Starting out in the early 90s golden  era of rave, he went from old-skool breaks to nu-skool breaks via happy hardcore and
drum & bass, spending all his money on turntables, mixers and vinyl while changing
his DJ name more often than his underwear.

In the early naughties he developed a naughty relationship with psychedelic trance. Inspired by it's smooth curves, other-worldly atmospheres, and an unrivalled ability to produce kaleidoscopic visions in the 3rd eye, he endeavoured to step up his production
game and synthesize the ultimate heady dance music hybrid: psychedelic breaks!