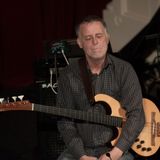 Ronan Guilfoyle is a major figure on the Irish jazz scene with an international reputation as a performer, teacher and composer. He has performed internationally as a bassist with some of the world’s leading jazz musicians, (including Dave Liebman, Brad Mehldau and Joe Lovano), recorded extensively, and been a guest lecturer at more than seventy universities, focussing on the subject of rhythm, in which he is widely regarded as a major innovator. He is Director of Jazz Studies at Dublin City University.

Ronan has been composing for classical, jazz, and mixed jazz and classical ensembles since 1993, specialising in compositions which feature both improvised and written music. He has a large body of work that ranges from solo piano pieces, to chamber works, to orchestral compositions.