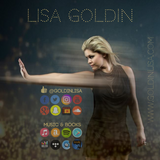 No matter where our Johannesburg singer-songwriter lands Lisa Goldin hits the headlines. Touring London, Ibiza, Dubai and Asia, with performances alongside Ed Sheeran, Jessie J, Scouting For Girls and Barbara Tucker. Our bombshell is unstoppable.
With singles “My Fire” and “Really Doesn’t Matter” airing nationally on radio and TV in South Africa, Goldin was nominated as exciting emerging act in 2015 by fans on @SACharts musicza.co.za. Hit song “My Fire” was listed as 2nd most played song on No1 radio station, Hot919FM 2016-2017. However, her career was already on the rise before hitting her homeland.
In London, Goldin’s debut album “HerStory” made headlines for her performance in GuilFest, with Vivienne Westwood sponsoring her wardrobe.
The 2nd album “Who Are You, Again?” includes a book (about what it takes to be a successful artist), top tips booklet “40 Ways To Tame Musicians” and EP "Remix 4 Goldin" featuring 4 new DJ Producers - forming the #WhoAreYouAgain Project.