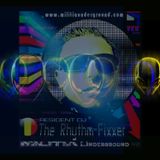 Never miss another
show from The Rhythm-Fixxer

Jonathan Dalle aka The Rhyhm-Fixxer was born in ostend in the year 1983 . He started to listen to electronic music at the age of 14 and he wass knowing that this would be the music for him . He started to listen to Hardcore and later on his first Techno rave he felt in love with this future space electronic music style . He was always dreamed that one day he would play and produce Techno music to make people dance . He started to mix at the age off 21 , 1 year later he played on his first party . Then 12 years later he started to make his own music . The style's he play's and produce is Techno , Hard Techno , Peak Time Techno , Hypnotic Techno , Minimal Techno and Melodic Techno .His track selection and mixing skills make a perfect combo to set the dance floor on fire . Energetic Techno is what he brings . Heavy pounding beats , energetic synths and percussions , smashing snares , sharp rides and hithats are the perfect ingrediënts to bring the people in extase and make them dancing.