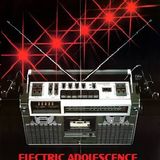 www.electricadolescence.com is a music blog that begs for an existence where album liner notes are considered biblical passages, and one which explores the most fertile terrain between the underground and mainstream pop charts. Providing a detailed background of the music culture referenced in the screenplay, the site features a sort of multimedia thesis on the history of popular music from the 1950's through the 2000s, with audio and video compilations summarizing each decade, as well as a similar feature on the best uses of music throughout the history of cinema.