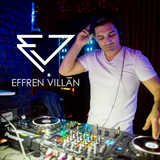 www.EffrenVillan.com
San Diego- Los Angeles-San Francisco-Miami-Las Vegas
Bio: Effren Villán is a turntablist and remixing originator, as well as a leader amongst Video DJs. His musical roots of House, EDM, Trap, Moombah, Hip Hop, Mash ups, Indie Rock, and Neo Soul, are unleashed in a hypnotic explosion of melodic and visual power when he is behind the decks. Effren's journey began while working amongst the geniuses at Lucas Film studios during Star Wars Episode One, where he was inspired to develop his aptitude for sound engineering and production. Years of experience, academic degrees, and his commitment to excellence has earned him several exclusive clients including Red Bull Energy, Playboy, Hard Rock, Sleeping Giant Music, The Five Group, Eventvibe, Channel 93.3FM KHTS, and club residencies throughout California. Effren Villán's experience, innovation, and commitment ensure that he is an artist that intends to leave a permanent mark on the dance music world.