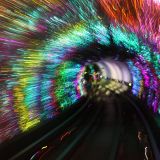 Chris Brennen aka Droid Assembly is a 30 yr old DJ from Sydney, Australia. He first got introduced to Psytrance back in 2011 by a friend that had been to a couple of psychedelic trance parties overseas. He was totally blown away by this new type of music he had never heard of before.

Chris always had a passion for eclectic music,he grew up listening to strange funk/metal music. Chris has had a love for the lower range of the sonic spectrum since forever. Played bass guitar throughout and after high school, played in various bands during that time.

After a year or so of attending bush doofs his passion for the night time psy grew expediently and he decided to start djing. After putting hundreds of hours into practicing and expanding his collection, he was ready to start unleashing chaos on the dance floor.
Since then he has played at various bush doofs, exposing the punters to his twisted track selection. He takes pride in his meticulous set preparation