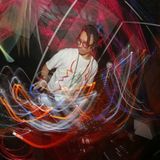 He was a boy who loved music, and learned the piano, the guitar, the bass guitar, the drums, the trombone and dancing. And he first used a turntable when he was 15 during his studying abroad program, and started collecting phonograph records and CDs, meanwhile he performed at various music events mainly in Amenura, Osaka.

In 2000, he applied his remix tape to club Sam and Dave, one of the most popular clubs in Kansai area, for a weekly competition “Monday NITRO” where best DJ team is selected by their skills.
He won the contest to get the position to play at a party on every Thursday. This victory led him to play regularly at a well known party “Body&Soul”.

He moved to the US and then to Jamaica to learn real black music. While in the US, he got the certificate of professional bartender. After he got back to Japan,he is on TV and radio program, while he plays at big DJ competitions.