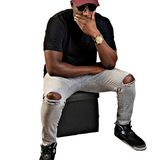 DJ SLy'D is a young and talented dj originary from Guadeloupe (French West indies) and was born in Colombes (Paris suburb) in the 80's, started his dj career at the beginning of 2000's.
His passion for the mix rapidly grew up when he was 17 and discover the universe of the nightclubs.
He used to go to carribean parties and observe confirmed dj mixing, and this is in that way the idea to become himself a dj had been developed in his mind.
After 2 years of practicing on softwares like Virtual Dj or Mix Vibes, he decided to buy his « first » Pioneer decks.
Now Dj Sly'D has grown up, he mixed in many countries like UK, France, Singapore or Swizterland!
He is currently one of the most talentuous dj in Paris!

His strength : electism. He is able to manage loads of different styles of music, his universe is a « melting pot » between Hip Hop, Afro Beats, Funky House, or Dancehall, Carribean and latin music.