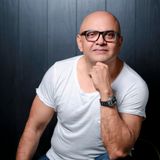 Sanjay Dutta needs no introduction to the clubbing circle. This long standing icon of dance music is a pioneer of sorts, taking the onus of introducing forward thinking electronic music in India.
Spanning a stellar career which began in 1990 in the bustling city of Kolkata. Sanjay forged an unparalleled nightlife scene which ultimately resonated to every nook and corner of India, making him the most sought after DJ in the best nightclubs of every Indian city.
He is revered by every DJ for his endless qualities as a master performer often referred to as the 'BEAST FROM THE EAST' and as DADA among the DJ fraternity.