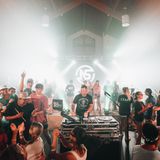 88.1 WTSQ - One Hale of a Block Party (Vibrant Place)
by Nick Scott

Nick Scott grew up in South Lebanon, Ohio just outside of Cincinnati. Nick started his entertainment career in his home town working in both live radio and DJ events beginning in 2002. While in Cincinnati he worked as an Radio Personality on THE REBEL 105.9, WARM 98.5, Q102 CINCINNATI, and ELECTRIC 102.7 CHARLESTON, WV.

Behind the turntables Nick has opened for or in support of National Recording Artists such as Craig Morgan, Florida Georgia Line, Earth Wind & Fire, Miranda Lambert, Blake Shelton, Flo Rida, Salt N Pepa, and Nick Lachey to name a few. Nick has performed at many notable East Coast events such as Girls Night Out WV, the Color Vibe, Color My College, The Greenbrier Classic, and a match between Pete Sampras and Andre Agassi.