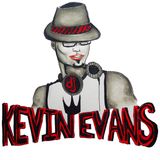 Born in Toronto Ontario, he moved to London with his father in 2000 and became a self made promoter and deejay known for his high end fashion style, exclusive interviews and grand style events.

He is most known from his Internationally broadcasted radio show Phresh ONE. In 2010 he registered The D'Amelio Group (thedameliogroup.ca) specializing in Electronic and Indie Music Marketing to the Gay and Gay Friendly scene in the South Western Ontario region.
To date- he has played alongside Canada's best including Marty McFly, Deko-Ze, Chiclet, Melting Man, Kerrie Nation, Jason Score, Soulfix, Lazy Rich,D-Monic, Cherry Bomb!, DJ Juniah, Giddy, DJ Ruckus and many more

Hit up www.djkevinevans.ca for more music and more!