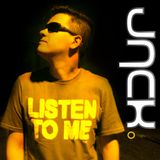 With over 26 years of experience, Jack was one of the most influential names on the Brazilian trance and progressive scene during the 2000s. Also as producer, he was nominated as “Revelation Producer” at the 2008 DJ Sound Mag Awards and as a result, is earning more international recognition. Music produced by Jack was included on the playlists of artists such as Paul van Dyk, Ferry Corsten, Judge Jules, Andy Moor, Marcel Woods, John O'Callaghan, Flash Brothers, Agnelli & Nelson, Solarstone, Eddie Halliwell, and many others. He has produced recordings for Maelstrom (UK), Spinnin’ (HOL), Five AM (UK), Fraction Records (UK), Bonzai (BE), Discover Dark (UK), Bralli Records (BR) and 40º Degrees Records (UK). In 2009, Jack released his first compilation of dance tracks, entitled “Energy BR presents Global Concept”, in conjunction with the Factor 4 and Armada labels in 2008.