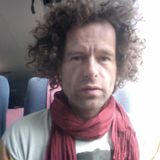 https://soundcloud.com/robbertsteer DJ Chaos started out playing records in the winter of 1989/90 initially as an eclectic take on inde-dance. Soon after hip-hop became the chief Chaos addiction as he got his first prime residency @ Melkweg Amsterdam. In 1995 Chaos&Ldopa started 'SABOTAGE' to celebrate the radical eclectic, though it was drum&bass that made dj Chaos a household name in Amsterdam. In the late 90s Chaos&Ldopa were running Amsterdam with residencies @ Paradiso, Roxy, Melkweg & Lowlands. In the 2000s Chaos switched to a more reggae based sound, hosting the KNOCKOUT night for over 10 years and taking a break from deejaying to focus on philosophy, astrology and travelling. After returning with AFRODISIA (2007) and BAM BAM (2011), Chaos got caught by the downtempo sound in Brazil and relocated to Berlin in 2012.