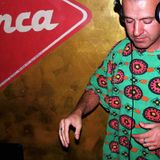 I DESERVE TO BREATHE - Mixed by DJ BEAT
by Dj Beat

DJ BEAT is one of the most experienced DJ’s from Latvia. His DJ skills and experience developed alongside the Latvian dance music scene itself. From the start of his DJ-ing career he has been actively promoting Dance music in Latvia and in the Baltic States.

Although he has started to spin vinyl in the early 90’s, in the very beginning of Latvia’s electronic music era, DJ BEAT joined the music scene at the early age of 6. He studied at the Academy of Music, where he had mastered solfegio, piano and spend 11 years singing in "Jazepa Medina” boys choir, one of the leading choirs in the Baltic States.

Later, upon discovering such music styles as disco, house and acid jazz, DJ BEAT realized that his future would definitely be associated with music. 1990 arrived & this was the time when DJ BEAT DJ’d for the first time, playing on "reel to reel” tape recorders in one of Riga’s discotheques called "D’Mix”.