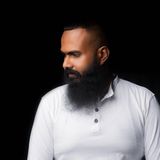 Never miss another
show from ULTRA

Ultra is a versatile and dynamic DJ personality from the island of Sri Lanka. Ultra first entered the DJ scene in Colombo, Sri Lanka as a mobile DJ in 2002.
Ultra then soon progressed to the next level, when he assumed the role of Resident DJ at the trendy Mix Bar of the Taj Samudra Hotel in Colombo and later at the very popular ‘Library’ Club at the Cinnamon Lakeside Hotel Colombo. Using his vast knowledge and experience as
both a Mobile and Resident Club DJ, it was in 2010 that Ultra began a new journey as techno and minimal based artist and DJ.