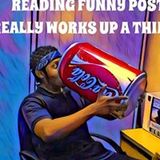 DJ MK, producer and entertainer enthusiast alike, Dj MK was born in Jamaica. When not performing he spends his time creating his own music...aided by over a decade of playing music and an upbringing in a very musically influenced community. Having spent many years playing at some of the major local night clubs along side local (hard hitters and national acts alike), djing special events and promoting his own shows, for Mk it's all about mood and deep hypnotic groove, playing those tracks that suits every crowd that gets you tapping your feet and nodding your head with you realising it, regardless of genre, tempo or style. Don't be surprised when you suddenly find yourself dancing.