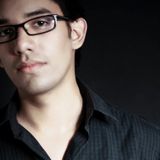 Minimalist DJ and Producer based in Mexico, born in 1989 and involved from around 8 years in the electronic dance music scene, influenced and captivated by Minimal, Psychedelic and Techno sounds with dark and futuristic touches.

His professional DJ career start in 2009 becoming Resident DJ at Digitally Imported Radio and United Radio hosting his monthly radio show "Symmetrical Madness" exposing fresh mixes with the most new, energized, innovative and euphoric sounds from the greatest productions from rising and renamed artist around the world.