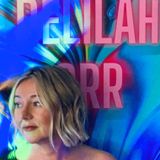 Delilah Orr is a Sydney DJ originally from London. She has had an ongoing love affair with House music since she was given her first tape of, now, club classics in 1990.

A regular on the London gay club scene in the 90s, she cut her clubbing teeth in the fun and frothy atmosphere of Love Muscle at The Fridge in Brixton. Her musical tastes progressed to Trade at Turnmills, a sweaty, gay Hardhouse after-party that was always banging.

These experiences are apparent in Delilah's mixes where you can expect to hear funky, soulful grooves leading to pumping basslines and sexy, sassy vocals.