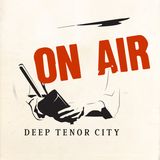 The Deep Tenor City Radio Show was on Back2BackFM in Aug 2015 by Dan and Oli Savill.