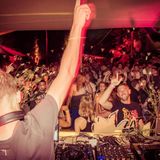 Dawee is a Reggae/Dancehall/Soca/Urban DJ and MC currently based in Bishkek, Kyrgyzstan. He is part of the Berlin-based "Sound With Soul" (www.sws-sound.com) since 2004. In his live shows, he combines Dancehall, Afrobeats and Reggae with cross-cutting styles (Tropical Bass, Cumbia, Moohmbaton) and plenty of exclusive remixes. He is also an MC and has been killing it across the globe: since 2010, Dawee is the official "SWS Reggae Ambassador" as his work in development aid has turned him into a real globetrotter. From regular one-man shows in Zimbabwe, New York and Geneva to the creation of a Caribbean music scene in the Republic of Moldova, he has continued to represent SWS globally.