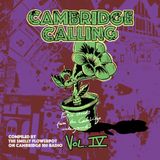 Never miss another
show from The Smelly Flowerpot

Long, long ago in the mists of ancient time, a baby was born in a small village in East Yorkshire. As he grew up, he embarked on an epic journey that was to eventually take him to a small town in East Anglia. He liked words with ‘East’ in them, such as Yeast and Easter Egg. Along the way he soaked up the many musical sounds he came across, storing them in his sponge like brain for reference. One day the wise men of Cambridge 105 came upon a message from the now fully formed adult and, intrigued by his nom de plume of The Smelly Flowerpot they offered him a show in which he could squeeze his overloaded musical sponge all over the local airwaves and beyond. From that day forth, The Smelly Flowerpot offered up a veritable smorgasbord of long forgotten or never heard before tunes from near and far, from now and then, from this genre and that genre and from all points in between. Artists regularly gather on the show to discuss their music, play their music, eat the host’s biscuits and chat