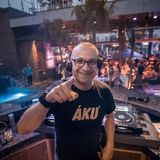 Having shown an affinity for music from a very young age, DJ Daniel Skulnick has been fine-tuning his DJ skills with a unique repertoire of mixes, music elements and playlists. Skulnick was born and raised in Toronto, Canada. His first introduction to electronic music was the 90's rave scene. A scene in which he became a pioneer of. He fell in love with Jungle, Drum & Bass and Funky House. In 2009 Skulnick moved to the Philippines and was frustrated by the lack of proper House music in the country. He decided to start playing again and started off as an opening DJ, setting the nights up with his signature style house. His career took off in 2016, propelled by a loyal following that loved and shared the same admiration for his sounds. With influences ranging from Funky House, EDM and hip hop, this is one DJ who isn’t afraid to innovate and try something new. You can find Skulnick on a regular basis every Sunday at Aqua Beach Club, where he has been a resident now the last two years.