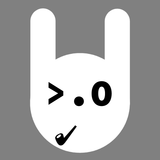 Streaming more or less live (he gets called away to dinner - back in fifteen minutes) from the spare room in his family's house in New Zealand, the Cranky Rabbit does things to dance music, and occasionally presents a few rock, alternative, punk or world-themed sets.

And stop laughing about the name. There was a DJ called Tegel Chicken in the 90s.

And yes, his SL avatar is a female rabbit furry. It was easier to get nice clothes and had a more realistic body shape than most of the human avs out there.

When not being driven mad by work, he strangles tunes with the aid of Penny the Unexpectedly Musical Netbook, Virtual DJ, and a Numark Mixtrack Pro II which shall remain nameless.

(Cover shot taken at Fracture, owned and operated by djb3t4, who should be listened to. A lot.)