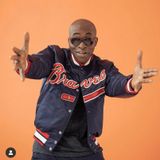 Charlie Dark loves playing records, it’s been in his blood since he was a kid and from the age of 13 he knew that the turntables were one of his callings. 80’s pirate radio was his teacher and as a teenager he spent hours in his bedroom taping shows off the radio and trying to replicate what he had heard on his mums stereo. Luckily for him, one of his friends somehow managed to convince his parents to buy him decks and sixth from was spent playing at birthday parties of friends and at their own events across South London. From his time on Mo Wax records with Attica Blues in the 90’s, the subsequent major label deal on Sony and the plethora of remixes and productions, Deejaying has been at the heart of everything he does. These days most people know Charlie as the running guy, the founder of the Urban run collective "Run Dem Crew" and an advocate of mental health and wellness alongside all of his community work. If you attended or heard about his Blacktronica parties or sets at the leg