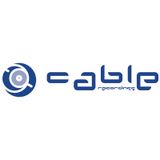 Never miss another
show from cablerecordings

Owned and operated by Justin Johnson and 3PO, Cable Recordings has been on the scene since 2000.
Cable's first release (Secret Society 'Stolen') featured a scorching remix from John Selway. So good, in fact, that DJ Dan calls it a classic. Based out of San Francisco, but originally formed in NYC, Cable Recordings is owned and operated by Justin Johnson and 3PO, who met while working at then world famous Satellite Records.
Cable's sound is constantly progressing, with an innate love of Tribal, Tech House, Progressive, Electro, and Breaks. We strive to offer something for everybody.
Tracks have been supported by Richie Hawtin, Danny Tenaglia, Slam, Pete Tong, John Digweed, Slacker, Satoshi Tomiie, Terry Francis, Raymundo Rodriguez, Rulers of the Deep, Cevin Fisher, Stonebridge, and more...