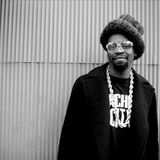 choreography. Having worked and performed with

internationally acclaimed acts such as: Mariah Carey, Will Smith,

brought the raw style of self-taught dancing into the mainstream

media. Terry is also a member of the crew, Elite Force, a.k.a.

Mop Tops, which has been recognized as constructing the face of

hip hop theater group. Despite his commercial success, Terry has maintained his status as a

continuing to enter dance circles and innovating and developing his skills.