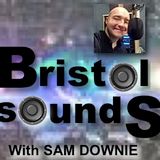 DONT FORGET If you want more? visit the official website at: http://dsoundz.co.uk/bristolsounds

In 2001, Bristol Sounds emerged into a 7-part short series of features to be broadcast on Radio stations around the world, including Active 89FM in Wellington, New Zealand and others in the USA.

In April 2007 BRISTOL SOUNDS was reborn on Radio Salaam Shalom, a unique online radio station in Bristol. Bristol Sounds was broadcast for 3 hours on a weekly Wednesday afternoon slot. As well as being released as a "edited version" podcast to iTunes.

BRISTOL SOUNDS supports the musicians, bands, dj’s and venues behind the world famous music scene of Bristol, SW England.... think Massive Attack, Portishead, Roni Size, Jody and Nick (Warren) from Way Out West... and you are there!

In 2011 - Sam Downie (Presenter) will be uploading the FULL series of Podcasts, from the BRISTOL SOUNDS Radio shows, so keep coming back!