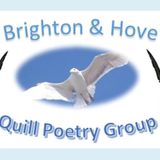 Never miss another
show from The Brighton Quill

Terry was born in London in 1934; Terry has always very keen on sports, cricket, rugby, tennis, and chess.
Terry has been very involved with many charities; this is a very important area of his life
Terry was married for 54 years to his wonderful wife Muriel, who died six years ago.
12 years ago Terry began composing rhyming poetry, He describes himself as a romantic poet, he also includes humour in his work Terry is also an author of many short stories. Currently Terry has recently completed his book titled” We Love Brighton & Hove” .Terry’s books all available on Amazon.
Terry is the founding member of the Brighton and Hove Quill of poetry group. (also known also as the Brighton Quill).To poetry lovers everywhere, if you would like to join us or have your work read live on the radio, please contact terrygodwin7@gmail.com.
We read every Thursday afternoon between 4.00 5.00. Our readings are recorded; you could listen to your poetry along with others.