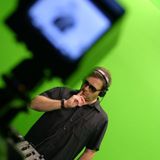 BORIS BJELICA BEBETTO was born in Pula, Croatia. His DJing begins in elementary school. Bebetto played synth and drums in several Pula punk/alter/rock bands.. From 1996. to 1998. he played jungle, dn'b and dub at the parties of MALI MRAK. From 1998. to 2004. he worked at Pula's Radio Maestral as a host, journalist, DJ and music editor. Since 1998. his sets begin to be a fusion of deep/tech/progressive electronical music. Bebetto was member of the TCM group that organized the legendary MTV VALKANA BEACH FESTIVAL. From 2003. to 2012. he worked as a manager, organizer and DJ in Rovinj's MONVI CENTER. For the last ten years he has been a part of the SEASPLASH Platform, which has actively participated in the organization of OUTLOOK, DIMENSIONS, SLURP!, SEASPLASH festivals and other events. From 2017. to 2020. he was the program manager and much more in the Pula's club KOTAČ. He is currently at Pula's RADIO ROJC. Fusion is BEBETTO’s musical philosophy.