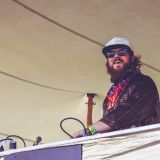 DylPrickle Send it past 100 mix
by Dyl Prickle

Having fermented his musical tastes and skills all over the Island Dance scene with some of the best tutors and teachers the island has to offer "Dyl Prickle" has broken the mould of the brine in which he was grown. Originally dragged through the mire that is Vancouver islands party scene by the likes of Fire Budha and Johnny Waffelz while operating as a "speaker bitch" and "wire wrapper" for "FireBoy Sights and Sounds" the south island legend "Monty" took him under his wing to help shape the incredible sound scape weaver that is Dyl Prickle. who in latter years got much more tutorage through the north islands old skoolers such as Sleep Walker, Agent Hooper and Em.Ash to name a few of the folks who are proud to have shared the decks with this bass rocking maniac of the highs and lows. you never know what to expect when Dyl Prickle jumps out his jar to let loose bass cannons of all sorts of varieties, from G-house n breaks to Tech house and Electro.