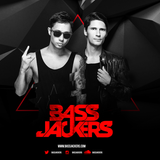 Never miss another
show from Bassjackers

One afternoon somewhere in the beginning of 2007 two friends decided to join forces, one DJ and one producer, both sharing great passion for house music. Bassjackers was born! Marlon Flohr and Ralph van Hilst had not foreseen what was to come when they started their collaboration. Marlon was mainly DJ-ing and playing house music, when the idea came to push Ralph’s productions in a direction where Marlon could play the tracks in his sets.

Since then Bassjackers have remixed for A-list artists like Rihanna, Enrique Iglesias and Moby and played in clubs from Ibiza alongside Tiesto, to Las Vegas alongside Afrojack, and continue to tour around the globe with a recent emphasis on North America.

Jackin the Bass at a venue near you and on air. Let’s Get Weird!