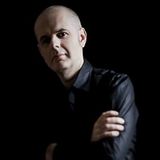 Into The Groove #110
by Bass_funkReposted

Aldo Bergamasco aka Astralbody is an Italian producer, musician and sound engineer with 20 years of experience.

He started his business in 1994 when he founded his own recording studio ‘Theatre Studio‘ where several musicians like Gigi D’Agostino, Cico Cicognani (bass guitarist of Laura Pausini ), Hevia, Ronnie Jones have recorded their songs.