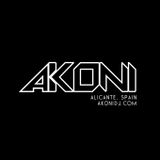 Never miss another
show from AKONI

Akoni was born in England in the 80's and grew up during the party era. Trance was born and Akoni fell in love. From his late teens, he dived head first into DJ'ing with belt-driven vinyl decks, a twin-cassette player and a CD player, after being inspired by tracks such as Cafe Del Mar by Energy 52, You're not alone by Olive, Not over yet by Grace, and many many more classics.

His first gigs were held in his garage for friends and neighbours who also had the passion for Trance music at the time. This is when he knew this is his dream; To perform, to share the passion, to make people feel alive. During the past few years, he's had gigs in Sheffield, Chesterfield and Derby.

Feeling he needed to expand more, he has now moved to the beautiful Costa Blanca region in Spain. With cities such as Benidorm and Alicante and the infamous “Island of Trance” Ibiza within arms reach, the opportunities are endless.