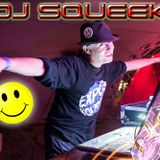 Rock It Real with DJ Squeek

Never miss another
show from Rock It Real with DJ Squeek

Rock It Real with DJ Squeek

DJ Squeek (Aidan Harper) is passionate about SA music. Aidan freelanced as a music journalist for SA national newspaper "Cape Times" and is somewhat of a celebrity in the local music scene. Aidan has interviewed many local and international artists.

Aidan is a sound engineer by trade and has worked in the music, radio and television industries

Aidan started out co-hosting the UCT Radio breakfast show with Paul Playdon which ran for 3 years and then hosted the SA music arts and culture show for six months. Aidan was the Cape Town gig guide correspondent for the Barney Simon show and the 8 till Late show with Nicole Da Silva and Kamza (Radio 2000) for almost three years. Aidan guested on Rock Out Radio and hosts the Rock It Real SA music show on MuthaFM. Aidan also co-hosted two shows on 2oceansVibe Radio with Aimee Eveleigh.