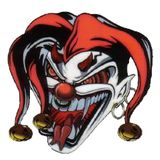 Never miss another
show from WickedPlay

WickedPlay, has began his Dj project back in the days of 2001 when he became resident Dj in micro club, HEROES (Lisbon).

During this period he has had a fast development process, having been invited few months later to play in Industria Lx Club, known by being one of the most recognized Lisbon’s clubs at the time.
The performances in Industria Lx Club proceeded monthly.

In 2002 appeared an invitation to act on the biggest music event of his country on that year, the Elektro Parade Festival.

This invitation offers WickedPlay the opportunity to play for more than 10.000 people along with several Top international DJ's and Producers such as DEEP DISH (USA), TRENDROID (USA), BEHROUZ (USA), THE ADVENT (UK), MARCO CAROLA (IT), CARI LEKEBUSH (SE), and some of the best portuguese dj's.

Since then, WickedPlay has played from North to South...