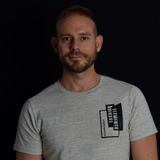 Dj from the 90s, in 1994 he started DJing as a resident in many clubs and halls like Joker Queen, Kiu, Sala Boss, Bless, Kokun Ocean Club, Orange Lounge Club, Locos Club, etc. Resident on the Costa del Sol since 2015, in 2017 he began his career as a producer, performing works for record labels such as Flashmob, Be One, Klaphouse, Low Goroove, Ole rec, Whore House, Which Bottle, Habitat, Vamos Music, Bedroom Muzik, Huambo, etc. His style of production ranges from the freshest and tribal house to the most powerful tech house.
I have shared a cabin with colleagues like David Penn, Dennis Cruz, Nic Fancuilli, Uner, Andrea Oliva, Wally Lopez, Mathias Tanzmann, Chelina Manuhutu, Davide Squillace, Albert Neve, Karim Haas and others.
And in just 1 year as a producer I have released more than 60 tracks to the market. Being some of them in the top 100 of Beatpor and Traxsource. As for example Its got a move, Dark Face, I Need You, Check this sound, Feel It, Synthetic Harmony, etc