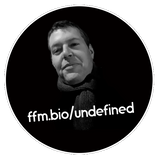 DJ & Producer based in Luxembourg.

Recently signed artist with the London based SOM Records Ltd (Sounds Of Meow) for his 2020 Progressive House track "Mavka", UNDEFINED embarked on his musical voyage of artistic discovery as a youngster, growing up listening to a variety of musicians and genres that have played an influential role in shaping his signature sound.

He has a DJ background back in the 90s at the beginning of private radio stations. Born in Brussels (Belgium), his musical roots are New Beat, Techno and Trance. With time, curiosity and from living in different places such as South Africa, Gibraltar as well as the South of Spain, he has extended his musical interest to a wider list of genres. He has also been mixing for several bars and small clubs everywhere life took him.

Music is my house. Door is always open :)
Support (•_•) https://ffm.bio/undefined