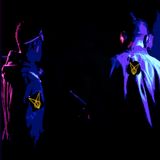 Bad Rabbit is Blackout x Nova Jade, a DJ Duo based in Victoria, BC that emerged after a meeting over tea, a few jam sessions, and a camping trip.

Originally from Québec, @blackooout started mixing house and hip hop in 2010. Nova Jade*, originally from Los Angeles, is an award-winning DJ who has always mixed house and eclectic music since 2003. Blackout has rocked crowds of 5000, and his underground flavor gets bodies moving whenever he plays.

Nova has opened for Grammy-nominated artists like Kelis, and played at venues like Beta Beatport Lounge in Colorado, Club Avalon in Hollywood, and The Hive Bouldering Gym in Vancouver. With 21 years of combined experience, and their shared passion for music, bass and dance, Blackout and Nova Jade as Bad Rabbit are a duo on the rise, with the energy to match. Got Rabbit Food?"