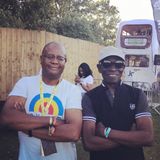 A Foldedspace Special - Charles Tolliver: A Legend In Music (in conversation) - 8/11/20
by Tony Minvielle

Tony Minvielle is regarded as one of the most respected and talented and dj's in his field receiving props from dj's and musicians, as diverse as Gilles Peterson, Grammy winners India Arie, Snarky Puppy, Quest Love, Gregory Porter amongst, many others. He's been a contributor to Straight no Chaser magazine (including interviews with the late Curtis Mayfield) from its inception. He's lived in the Atlanta, spent time in Warsaw, and has worked with some of the greatest artists of our time including Roy Ayers, Mark Murphy, Jazz Warriors, Gil Scott Heron, India Arie, Galliano, Omar, Weldon Irving, Jon Lucien, The Roots, Incognito, Curtis Mayfield to name a few. He's graced the decks at Cafe Del Mar, Londons Jazz Cafe, Atlantas Ying Yang and numerous festivals. Broadcast credits include WCLK Atlanta, JazzFM, Virgin Radios Liquid London and he now hosts the seminal FoldedSpace on Jazz FM (DAB across the UK, Sky 0202 and JazzFM.com).