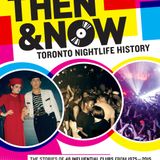 Never miss another
show from Then_And_Now

The history of a city's nightlife reveals its pulse. Journalist and DJ Denise Benson researches and writes this web series that tells the tales of influential Toronto clubs open during the 1970s through early 2000s.

Each instalment, originally found on the website of Toronto weekly The Grid, chronicles the story of an influential, now defunct dance club, live music venue or social space, with the participation of people who contributed to those clubs. Benson also digs to make Then & Now a rich multimedia series, incorporating original photos, DJ mixes and video footage alongside interviewees' stories to further give a sense of time and place.

All articles: http://thenandnowtoronto.com/ (includes chapters of the book not previously found online).