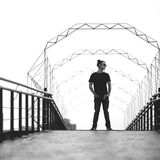 Never miss another
show from The Note V

Victor Ortiz a.k.a. The Note V is a Mexican Electronic Music producer that begins at the end of 2012 with a concept focused on reflecting His experiences through music, telling stories through sounds.

His first appearance was under the German label KDB Records and over time, his music was distributed in different labels having the opportunity to share his music in VA, EP's and remixes with artists like: