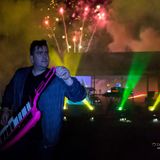 Never miss another
show from TheCircuitSymphony

The Circuit Symphony are a Retro-Nostalgic synthesizer band from South Wales. Mixing musical and technical influences from the 70, 80s and 90s! – Founded back in 2006 by Oliver Davis.

Performed in-front of over 4000 people at our outdoor shows that was conceived from the ground up by TCS for the third year running.
Every show is a blast of Lights, Lasers, Colours and sound!

TCS have produced/remixed and programmed for artists such as OMD, Howard Jones, Take That ( Progress Tour ) and have received credits for work we have done with The Human League, Steve Wilson, Ultravox, Eddie Grant, Howard Jones and more.
The Circuit Symphony are proud to be endorsed by Gforce Software – providing us with the tools that create our Retro-Nostalgic sound!