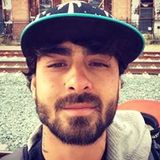 Tao Colella - Mexican producer born in January 1991 who has been involved with music since age 5 when his first steps with a guitar were learned from his father, also a musician.

After playing for several years electric and acoustic guitar, being in two Rock bands, experimenting all kinds of music and instruments, including bass and percussion, he became a freelance musician with a strong talent as a guitar player. At age 14 he got deeply involved into electronic music and learned the first skills in the art of DJing, rising a big interest in production and the music industry scene.

Creating only DJ sets was not enough, his approach to music production led him to take several workshops and clinics on specialized audio software, developing sounds around all styles & genres of electronic music being more enthusiastic about Techno & House Music.

Right now he is devoted to his new project (unsigned) which is House with an interesting style including groove melodies, soft keyboards