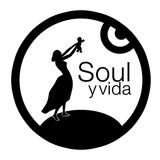 Never miss another
show from SoulyVida

Soul y Vida was a solidarity party for Leeds No Borders, hoping to relaunch soon probably in Liverpool. The name is a play on Sol y Vida (Sun and Life), which was a well known anarchist group active in and around Barcelona in the 1920s and 30s, centred on the libertarian Ateneo in the suburb of Clot. The group would organise picnics and hiking trips, promoted naturism, produced the magazine Iniciales and helped found the famous Iberian Anarchist Federation, the FAI. It was boss. The image we use as our profile pic is adapted from a cover of the contemporary anarchist cultural and scientific review Estudios.
The name Soul y Vida is also a tacit acknowledgement of the influence the soul scene in Spain has had on our taste for this music.
If you'd like to get involved then let us know.
https://www.facebook.com/soulyvida/ Twitter: @theoldrope