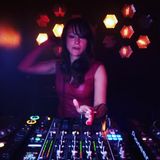 Rakele Rossi is DJ/producer from Arezzo Tuscany, living in Amsterdam. She is famous for her DJ skills and versatility, she is continuously touring within Italy and Holland, where she is based right now. Time ago she signed with Groom Lake Agents Artists Agency Amsterdam promoting Chicago House and Techno Detroit Legends.
Since 2017 she is organising the most fresh and underground party in Amsterdam “RAKELE ROSSI INVITES” at Club NL inviting the best artists from Holland. Recently she has released on Sun Generation Records “VENUS AFTER THE SUNSET” a colourful album from house music, acid sounds, progressive grooves and techno. Then after she released “SUNRISE” in ATHANOR Session Seven PLANET EARTH VV.AA.
Sun Generation Records also included the track “Roots” from Venus after The Sunset in 20° Anniversary Collection with various artists including Miki.