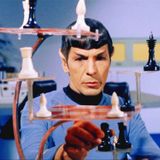 Never miss another
show from Sounds of Tomorrow

Dr Pete Sounds started DJing in the 7th grade on a US Army base in Italy. He started DJing at Drexel University at WKDU the spring of 1981 while studying Mechanical Engineering, and continued until 1997. At which
point he started webcasting - yes, over a 56k phone modem. Webcasting continued for 16 years mostly at the now defunct site drugmusic.com,
until he started up again at WKDU in 2015. A critic from the Philadelphia Inquirer called
his now 4 year old WKDU show "... outstanding broad-/ multi-cast music curation! Jibed w my
tastes, sure, but, objectively, on many levels, just ace programming - 1 of Phila.'s better
radio shows, no doubt..."